You are here: Home › Rwanda 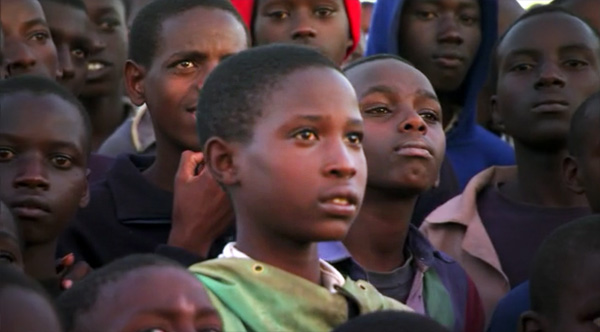 I saw a film on Saturday that made me wonder what South Africa’s film industry is doing wrong. It was ‘Finding Hillywood ’, shown as part of the Design Indaba FilmFest 2014.

The documentary is about a festival that travels between rural Rwandan towns, screening films by Rwandan filmmakers on a large inflatable screen. These free public screenings seem to attract the attention of the whole town, especially the children. What surprised me, was their reaction.

The kids appeared to be mesmerized by the experience of seeing a story told in their language, Kinyarwanda. It made them identify with the characters in a way they hadn’t experienced before. The synopsis of ‘Finding Hillywood’ even states that “this is the first time they have seen a film, let alone one in their local language’. I wondered why.

Are there no TV dramas in Kinyarwanda that these kids had seen before? In South Africa, this novel experience doesn’t occur because SABC TV dramas basically cover every South African official language.

The novelty of seeing a film in their own language made the Rwandan audience look past the low-budget quality of the films. To this Rwandan audience what matters is novelty and identification, not production quality.

South African filmmakers aren’t as lucky. Most young filmmakers will tell you that their shortfilm won’t be taken seriously if they don’t sink tens of thousands into production costs. There are exceptions of course, such as using a mockumentary style. But in general, there seems to be a direct correlation between the amount of money you spend on lighting and the impression of quality viewers will get from your film. As a result we don’t see South African filmmakers make thousands of cheap movies each year using the Nigerian film industry approach, informally known as ‘Nollywood’. Instead we see a handful of large films, usually funded by the National Film and Video Foundation (NFVF) or foreign capital that promote nation-building or cater to foreign perceptions of South Africa. The NFVF isn’t even interested in the Nollywood model, presumably because they’d feel embarrassed to support low-budget films made purely for a local audience.

Can we solve this problem? Is there a way to override the quality bias and have a film industry that creates more jobs by producing thousands of small films a year that South Africans will want to watch? I think it is possible, and I look toward music for examples.

What’s a better song, ‘Seven Nation Army’ or Michael Jackson’s ‘You Rock My World’? See, in music there isn’t that same correlation between production cost and quality. Because of the proliferation of music genres, there are more paths to success available to musicians than there are for directors. We need to cut new paths if we want to see more South African films. They could be B-movies. They don’t have to be projected on a big screen and they don’t have to be two hours long.