You are here: Home › Branding › Why Afrikaans needs vampiere and ongediertes

Afrikaans faces a dilemma. How can it remain relevant to a younger generation while maintaining linguistic standards?

Writers of Afrikaans teen fiction are using slang and English words in order to appeal to the youth. Purists obviously see this as a debasement of the language. It’s known as taalvermenging , a contentious issue that regularly pops up on the letters page of newspapers. Back in 2002, a 17-year-old Jackie Nagtegaal published Daar’s vis in die punch and sparked a debate that divided literature professors.  André Brink called it a rejuvenation of the language while Dan Roodt said that Afrikaans had hit an all-time low.

Part of the problem is that Afrikaans caries a historical burden. Because it is spoken by a community that supported a racist system, the language is tinged with verkramptheid. To many, Afrikaans is still associated with conservative white people even though that connotation is statistically inaccurate* . When an actor speaks an old-fashioned English dialect, he sounds sophisticated, even romantic. If he speaks formal Afrikaans , he’ll seem conservative and unfashionable.

So is it possible to side step these negative connotations? I think so.

It should be possible to get a young audience to warm to formal Afrikaans if it’s a dialect so antique that it isn’t associated with their parents and grandparents’ generation.  An interesting example of this trick is seen in HBO’s True Blood. Bill Compton is the romantic lead in the show. He’s also a vampire that once lived as a human in mid-19th-century Louisiana and fought for the South in the Civil War. That means he’s a confederate soldier with an accent that makes you think of a front-porch-sittin’ slave owner. But all of the potentially hazardous connotations are somehow sidestepped because he’s a vampire, and chivalrous, and 160 years old.

So Radio Sonder Grense should consider creating a radio drama with a teen novel tie-in about dashing vampires and beasts set in a contemporary South African town. It shouldn’t be a Twilight knock-off, but it will need a good dose of young love and drama. 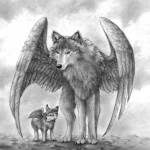 The supernatural beings are all a century old, which explains their use of old-fashioned Afrikaans. In fact, there’s the potential to base their dialect on the writing style of N.P. van Wyk Louw. He was part of the Dertigers, an innovative group of Afrikaans poets who gained notoriety in the early decades of the 20th century. Louw’s work often explored love and sensuality via supernatural imagery. Gestaltes en Diere, published in 1942, portrays dark leopards, alcoholics, sphinxes and wolves. It’s an ideal foundation for a new fantasy series.

I’ll leave you with a cool passage from “Ballade van die nagtelike ure” :

Keep up to date on the latest posts, by following me on Twitter or LinkedIn below.

Who is Rossouw Nel?

I'm a digital marketer, advising teams in 18 African countries, from Senegal to Mauritius. Also blogging from Cape Town about online trends and branding.

View all posts by Rossouw Nel →